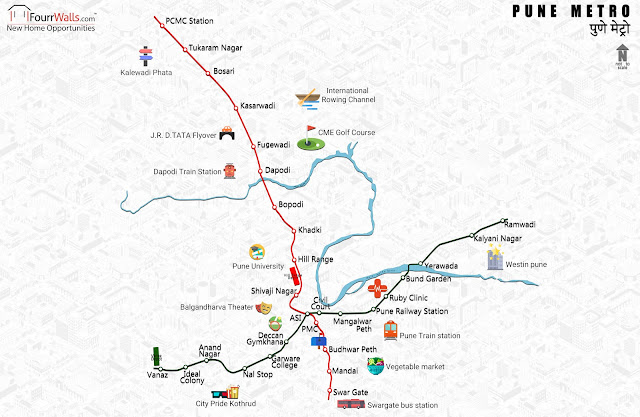 
Believe it or not, the upcoming Pune Metro is actually going to give a complete make-over to the city. Especially, with the rising traffic, when the city is deep merged into smoke and smoulder, the implementation of Pune Metro will not only decrease the pollution rate to a significant extent, but will also perk up the living of the citizens way much higher.
A recent survey states that the expanding traffic of Pune can never be balanced by any road-based system or by any fly over. So, while the entire city has come under huge stress with the increased level of air and noise pollution, the proposal of Pune Metro has appeared just as a beam of gleaming ray.
Let's explore the history-

After the Delhi Metro Rail Corporation gave in the detailed project report in the year 2008, the Pune Municipal Corporation yielded the proposal to the Union Government and made space for a number of provisions in the yearly budget for the plan. However, Pune Metro Rail Corporation will be undertaking the project and is expected to complete the same in the next few years.
Although most of the metro routes were proposed to be elevated initially, after the citizens of Pune differed with the pitch, the authority decided to opt for a complete underground project. The roads were the major concerns which were too narrow to stand the enlarged traffic which would follow the construction. It was November, 2011 when the Maharashtra Government proclaimed that all the metro routes in Pune would be underground. However, again in the year 2012, the PMC decided to execute the entire project as stated in the DMRC report – mostly hoisted and partly underground.
The routes-
The 1st Line- Pimpri-Chinchwad to Swargate – this will be the first route of the proposed Pune Metro. After trailing through the elevated path up to Range Hills, it will follow the underground route to Swargate. According to the DMRC report, this 1st line of Pune Metro will further be expanded to Hadapsar and Nigdi via Bhosari, Khadki and Shivajinagar.
The 2nd line- The 2nd line of Pune Metro will be completely elevated and connect Ramwadi to Vanaz via Mangalwar Peth and Deccan Gymkhana. The main depot of this 15 km long route will be at Kothrud. As per the plan, the extended line will go up to Chandannagar and a split up route will also be there to link up the Pune Airport.
The 3rd line- Deccan Gymkhana to Bund Garden – this will be the 3rd route with Swargate and Race Course connected in between.
The 4th line- The route from ASI to Hinjewadi will again be the elevated one and is expected to bring in a huge convenience in the transportation.
Airport line- This elevated line will connect Bhosari to New Pune International Airport via Moshi and Chakan.
A better connectivity to experience-
Pimpri Chinchwad- The first route of Pune Metro up to Swargate is expected to be a major hit! Locations like Pimple Saudagar, Pimple Gurav, Pimpri, Dapodi, Market Yard, Mandai, Budhwar Peth will be extremely benefitted with the plan. Especially, its underground course after Range Hills has elevated its importance yet more.
Ramwadi- The second route connecting Ramwadi to Vanaz is again going to mitigate the horrendous traffic on road and bring in a balance in the manner. Locations like Vimannagar, Kalyaninagar, Yerwada, Kothrud and even Warje will be highly benefitted with the scheme.
Deccan Gymkhana- After the successful implementation of the project, Deccan Gymkhana is going to get an elevated status, as it will not only make the transportation easy for FC College and Symbiosis College, but will also  well-connect a number of places including Pune Railway Station, Shivajinagar, Ruby Mall and many more.
Hinjewadi- The extension of 4th Pune metro route to Hinjewadi is actually going to perk up the entire transportation system of Pune. Although this particular plan from ASI to Hinjewadi was under controversy for quite a long gap of time, but the recent approval from the CM has appeared just as a toast to all the citizens. Hinjewadi metro station will be of great help to a number of adjacent locations including Balewadi, Patilnagar, Baner, Laxminagar and many more. Also, connecting North with the South, this metro route is really expected to bring in a quick transformation to the city.
Bhosari- Kalewadi Phata – The proposed metro rail in Pune is expected to be a bliss for the entire city and the extension from Bhosari to Kalewadi Phata is again not an exception for the people residing in the adjacent locations. Starting from Rudra Colony and Masulkar Colony to Sector 1 and Dhanwade Wasti, a greater cut of region is going to reap huge benefits from the much coveted Pune metro project.
Kasarwadi-Shastri Nagar – The construction of the project has not even started and the Pune metro map has already come as a stress-reliever for many of them who are nearly frustrated due to the huge convenience caused by daily traffic. The extension from Kasarwadi to Shastri Nagar will again be a big success. The adjacent areas including Kranti Nagar, Kashid Park, Yerwada, Vimannagar etc. will get in exclusive benefits from the metro route.
Bopodi- Chikalwadi, Aundh, University of Pune- Ever since the Pune metro news has hit the platform, the citizens are almost counting days for the execution of the same. The metro line connecting Bhopodi, Chikalwadi, Aundh and University of Pune is going to be a big respite for a major scale of people.   Moreover, this exclusive Pune metro route will be highly advantageous to the students from the University as well.
Also, the recent development plan approved by the State Government on 4th January, 2017 is expected to kick off the Pune metro project even earlier. Special emphasis has been given on the ‘influence zone’ and the locations like Shivajinagar and Peth areas are going to be highly benefitted from the same.
The bottom line-
To conclude, the implementation of Pune Metro will actually transform the city to an extra-ordinary height and bring in a number of opportunities for the property investors as well as the realtors. The advanced transportation is going to be a big stroke for the entire city.