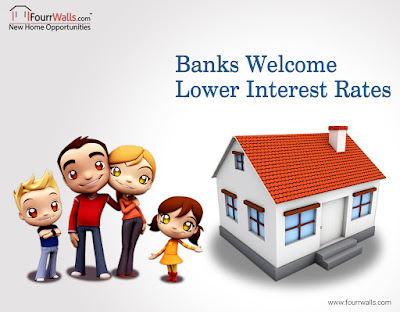 A Perfect Retort to Modi’s Appeal- Lending Rate Reduced by up to 90 Points. After RBI came with the decision of an unchanged Repo Rate on December 7, 2016, the recent verdict of Modi on yesterday has again left a deep surge on the entire real estate sector. The country’s leading public sector banks have slashed the MCLR by up to 90 points, making it an ‘easy-go’ for all the home buyers across the country. Among a number of rate cuts in the past years, this one has been marked as the steepest one, as it’s not only expected to perk up the loan growth, but is also  estimated as one of the most significant moves in the financial history of India.
MCLR (marginal cost of funds based lending rate) which has a direct impact on all the loans sanctioned in the country is decided to be 8 per cent instead of 8.9 per cent. Home loans of most of the public sector banks in the country are directly related to the one-year MCLR and the recent rate cut will be relevant to all the fresh loans granted to every home buyer in India. The expected interest rate between 8.25 -8.5 per cent is going to be a big relief to the entire community of the end users.
Apart from SBI, the other PSU lenders including Union Bank of India and Punjab National Bank have also decided to trail through the same path and slashed down the lending rate by 0.9 per cent. Also, IDBI Bank has announced the cutback by 9.2 -9.15 per cent, contributing to the move to a significant extent. The Prime Minister Narendra Modi’s appeal on December 31st to all the banks to pay special concern towards the demand of the poor and middle class people has been perfectly responded by the leading lender SBI as well as its subsidiaries.
Posted by FourrWalls at 02:55